Class Struggle International Workers (Trabajadores Internacionales Clasistas) is an organization of immigrant workers based in New York City. The topics covered by their new pamphlet are relevant to taxi and ride-share drivers across the country, including in Portland. 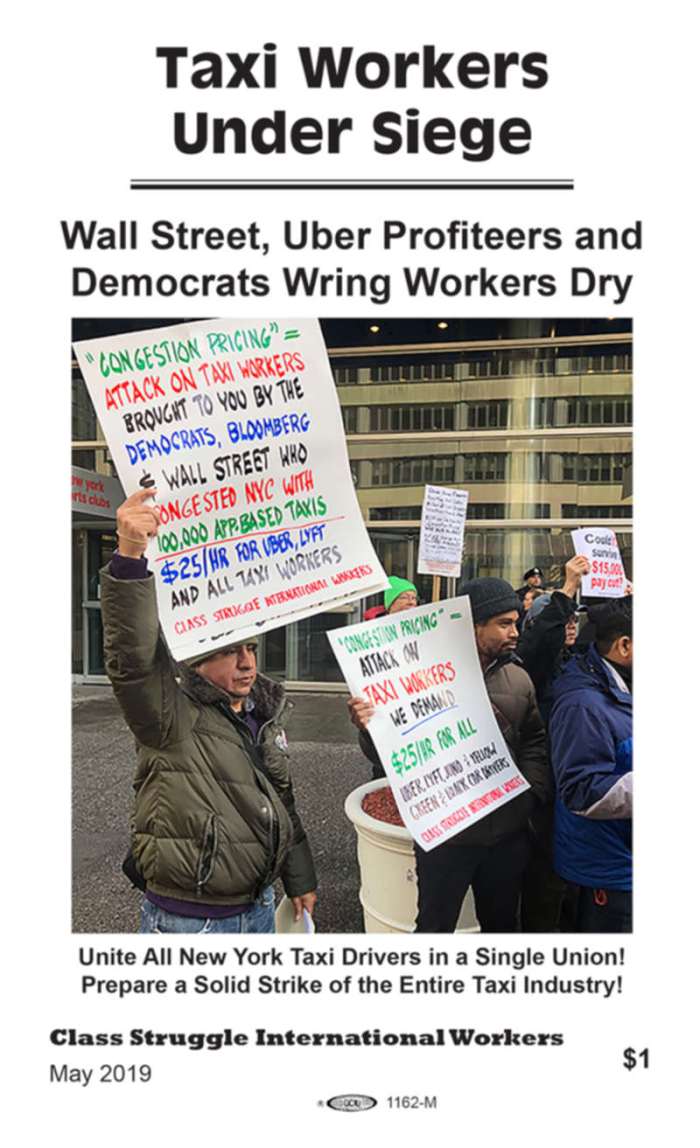 This update from Class Struggle Education Workers describes some of the efforts being made by class-struggle unionists to defend immigrants at NYC public schools and universities. It’s time for unions in the Portland area to take similar measures.

The following motion was adopted by AFSCME DC 37 Local 768 (NYC Health Care Employees) on February 6. This news can also be found on the website of Class Struggle Education Workers.

WHEREAS, the crisis of the undocumented in the United States has deep roots in a system of oppression and colonialism in which the U.S. played a major role; and

WHEREAS, some Local 768 members have been given instructions to decrease the population of undocumented immigrants in their facilities by 40%; and

WHEREAS, Local 768 members, like health care providers and other workers, have grave concerns over threats to this desperately needed safety net coverage; and

WHEREAS, Local 768 believes we have a basic ethical obligation to defend undocumented immigrants in need of health care from round-ups, jail and deportation by ICE; and

WHEREAS, any attempt to have Local 768 members identify patients for such discriminatory treatment would violate not only our professional obligations but NYC law and NYC Health + Hospitals’ stated policy; and

WHEREAS, this situation is made even more urgent by Trump’s attacks on “sanctuary cities” and NYC regulations limiting cooperation with federal immigration authorities; and

WHEREAS, we join with NYC-area building-service, education, Teamster, construction trades and other unionists in standing up for the rights of us all in opposition to attacks on our Muslim and immigrant sisters and brothers; and

WHEREAS, solidarity is a matter of life or death for labor, which is now under attack by anti-union “right to work” legislation and court cases (Friedrichs); therefore be it

RESOLVED, that Local 768 formally and publicly states the following:

1) We will continue to serve all those in need and oppose any attempt to use immigration status against them, or to collect such information.

2) We will not go along with demands to cut care to undocumented patients, which would violate our most basic ethical responsibilities.

3) We also reject any attempt to undermine the federally mandated right to treatment of all those seeking emergency care.

4) Local 768 will establish a committee to defend the rights of immigrant patients, families and staff.

5) We advocate that the unions of the NYC metropolitan area come together in a massive protest showing the power of labor to stand up against any and all anti-immigrant, anti-Muslim and other racist attacks in line with the labor motto, “AN INJURY TO ONE IS AN INJURY TO ALL.”

From Bridge City Militant No. 3.

We reprint below our translation of the declaration and program of Trabajadores Internacionales Clasistas (TIC, Class-Struggle International Workers), a new organization similar to CSWP that has been founded by immigrant workers in New York City. The original Spanish text can be found here.

“Neither Illegal, nor Criminals, we are International Workers”

Presently, up to 15 million immigrant workers, along with our families, reside in the U.S. without the documents demanded of us by the bosses of this country. Lacking basic democratic rights, we take on difficult and often dangerous work for poverty wages. Truly, we are what Karl Marx called over a century and a half ago, wage-slaves.

We international workers are the scapegoats for all the evils produced by capitalist society. We are called “criminals” and “illegal aliens” when we have committed no crime. We are accused of stealing the jobs of U.S. workers, when we do the jobs no one else would want to do. We are accused of taking advantage of welfare programs, when we are not eligible for any of them. In fact, undocumented workers pay up to 50 billion dollars into Social Security every year, and we will never get back a single penny.

What’s more, many of us were forced to emigrate because our livelihood was destroyed by the free-trade agreements and cruel wars unleashed by the U.S. that beset our native lands. But we aren’t just victims. Major sectors of the U.S. economy depend on immigrant labor. We form an integral part of the working class in this country. We have the power to liberate ourselves, and all the oppressed!

Various TIC founders have participated in important social struggles, for unionization and against all forms of injustice. We have learned from our own experience that what we need, and what we must organize, is a leadership adequate to the struggle we face, that is, a class-struggle leadership.

To do our part in this great undertaking, we have decided, working alongside the Internationalist Group, to form Trabajadores Internacionales Clasistas on the basis of the foregoing program:

Union Power! If we Play by the Bosses’ Rules, We’re Bound to Lose

In 2012, a group of brave workers at the Hot and Crusty bakery in Manhattan decided that they couldn’t bear their cruel exploitation any longer, and moved to unionize. After 55 days on the picket line, they won. In 2015, tired of miserable wages and dangerous working conditions, hundreds of warehouse workers at the photography equipment retailer B&H. inspired by the example of Hot and Crusty, launched their own union campaign, scoring another win. But we know that all victories in the class struggle are temporary so long as the system of production for profit remains. Unionize the unorganized! Picket lines are class lines – they mean don’t cross! For fighting unions with a class-struggle leadership! For total independence of the unions from the state!

The Bosses are Afraid of Us, Because We are not Afraid

In 1886, the International Workers Day, May 1, was established when a workers demonstration that demanded an eight-hour work-day was attacked by the police, resulting in numerous casualties and leading to the state execution of the workers leaders, the eight Chicago Martyrs. Today, 130 years later, undocumented immigrant workers suffer 12-hour days and work-weeks of 48, 56 or 72 hours, for starvation wages. We won’t take it any more! In 2006 millions of immigrant workers stopped work, reviving May Day in the U.S. We demand a drastic reduction in work hours along with a whopping raise! For day-laborers, without any job security, we fight for a union hiring hall. We need free, high-quality comprehensive and universal health insurance and health care. At the workplace we fight for union committees with the power to shut down unsafe work.

We know that every class struggle is a political struggle. In this election year 2016, the Republican candidate fans the flames of racist hate against Mexicans, Arabs and Muslims while he harasses women. The Democratic candidate wants to launch new wars in the Middle East, and is responsible for the 2009 coup d’état in Honduras. TIC opposes all capitalist parties and politicians. We who lack the right to vote call for the formation of a workers party to fight for a workers government.

In his 2008 electoral campaign, the liberal Democrat Barack Obama promised “immigration reform.” But eight years later we have nothing. Instead, the Obama government has deported nearly five million immigrants. The odious raids go on, and there are tens of thousands of immigrants in what are really concentration camps. We call for immigrant-worker mobilization against racist attacks, to put an end to deportations, to close the detention camps and win full citizenship rights for all immigrants.

Women’s Liberation: Duty of All Workers

March 8 is International Women’s Day, which commemorates the death of over 100 immigrant women workers in the Triangle Shirtwaist factory fire in New York in 1911, which was the spark for the unionization of the garment industry. Women workers shoulder a double work day, at the job and both before and afterwards in the home, where they are burdened with the responsibility for domestic labor in the family. They are constantly hounded by sexual harassment and unequal treatment. They are even denied control over their own bodies. TIC fights for equal pay for equal work. Around the world, we fight for free abortion on demand, at the sole decision of the woman. We demand free, 24-hour child care. Along with machismo, homophobic prejudices are a weapon of the exploiting class: every class-conscious worker is duty-bound to defend the democratic rights of gays, lesbians, transgender people and all the oppressed.

Black Liberation: Key to Workers Revolution in the U.S.

In this country, founded on slavery, the oppression of black people has been fundamental to capitalist rule. We immigrants are well aware of how the ruling class seeks to use us against our black sisters and brothers. We have already seen how police murder of black people goes hand-in-hand with the targeting of all immigrants by the repressive forces. The police are the armed fist of capital, racist to the core. We demand: cops out of the unions! Against racist killings, mobilize the working class! Revolution is the only solution!

Asian, Latin, Black and White, Workers of the World Unite!

Since the time of the First Workers International, the workers of all countries have had to unite our forces to win. We defend our African, Arab and Asian sisters and brothers against racist hatred! From the Middle East to Latin America, we fight for workers action to defeat imperialist war! From China to Cuba, we oppose efforts to reestablish the rule of capital.

International workers: we have nothing to lose but our chains. We have a world to win!